G.K. Chesterton penned down the words, “…God is strong enough to exult in monotony.”

I often find myself thinking about those words… Especially on Sunday nights. Why? Because Monday is coming. Monotony is coming. Waking up every morning for the next five days to (inner-cringe at these words) lists of tasks needing to be done (even bigger inner-cringe at this thought) in an allotted amount of time…

Oh… You can ask my hubby… The whole idea of a “schedule” is like a needle to my free floating happy balloon.

And then I think of that quote… About God “exulting” in monotony… That is inspiring. Truly, the entire universe is all operating in incredible monotony, sunrise after sunrise appearing in glorious light. And it makes me consider that yes- it is possible to exult in monotony. To shine every single day and to shine (yet another cringe for this late night mama)- in the morning.

(I know some of you morning people have no idea what that was cringe was for.)

It is possible to shine every day and to exult in the monotony.

But for me, that it is going to take the Spirit of God, no doubt. Perhaps for you too.

I pray that you and I get excited about this next week. That, like a child being thrown up into the air by his father’s arms, we begin to feel the arms of God helping lift us up out of our beds every morning- tossing us up and out into the tasks ahead of us- even those things that seem so out of our own reach and ability.

“Again! Again!” May we be able to have that kind of child-like joy for tomorrow as we lay our heads to sleep tonight.

Yes, Monday is coming. Monotony is coming. And the spirit of God in-dwelling in you makes YOU strong enough to exult in the monotony ahead. Shine bright friends.

I stepped outside and took in the beauty of the many trees in our backyard covered in ice.

You could feel it really, God’s grace covering everything.

Icicles hanging from outstretched limbs, each seemed to testify of a grace that covers every cold and dead place, even those places in our heart.

Those outstretched limbs, with raindrops frozen in time,

When you looked at them you could feel it- the wonder of the outstretched arms of Jesus.

He hung on a tree.

His love poured out to cover me, to cover us.

What kind of love our God is?

He whispers in the cold through frozen raindrop,

“I see every tear.

I cover you in those cold seasons.”

And I’ll just say it flat out- sometimes life is so cold and so hard you just want to be numb,

But looking up at the beauty in those trees,

You could just feel it- this isn’t about becoming numb.

It is about becoming beautifully still in the cold, awaiting new life.

His words, “My grace is sufficient,”

They are felt in the still, cold air.

You could absolutely feel it.

Testifying today that covering grace always comes back to a tree.

May you feel his grace covering you today.

To What Would a Bird Say? 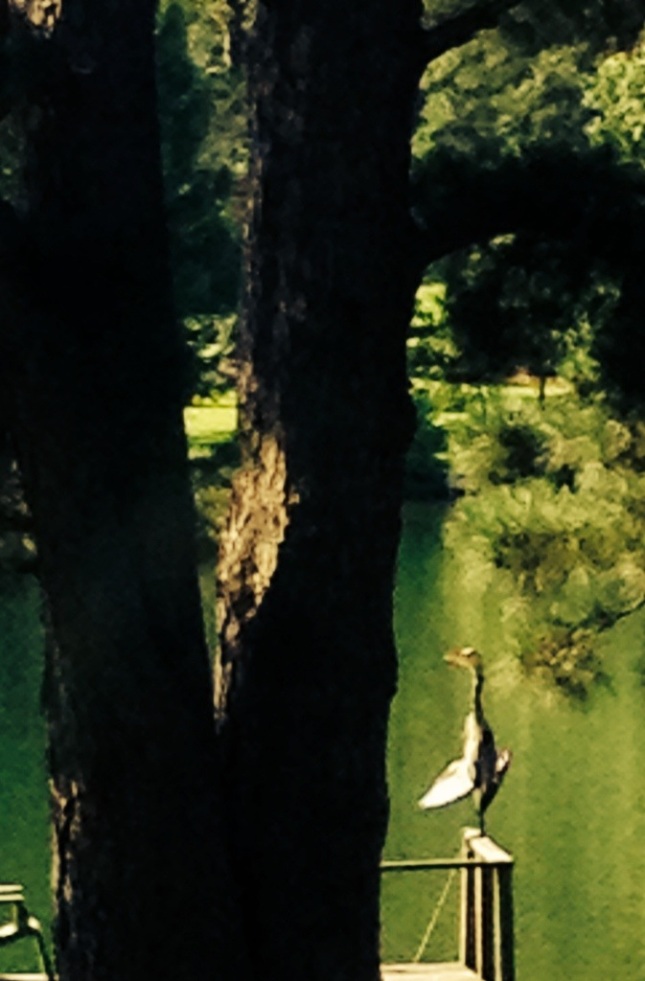 So I watched this bird this morning in the morning sun.

It stood there, so still, raising its head and chest, spreading and lifting its wings almost appearing as an act of worship truly.

And incredibly, tonight as I was preparing dinner, I saw it again, this time across the lake, raising its head and wings, still as ever, to the setting sun.

And I keep thinking about this bird.

About how from afar, based on what I could see, I would say that this bird finds its strength, its warmth, its rest in the sun.

After all, it is to the sun that it raises his head and wings both at the start and end of the day.

And perhaps an odd thought – but a thought nonetheless, I wonder tonight, to what would a bird say I worship based on what it sees?

To what do I raise my head and hands to at the start and end of a day?

To what do you?

A bit of a challenging thought, but one worth considering I think, especially in our high tech society.

What has our focus?

Where are we often found gazing and still?

What has our attention at the start and the end of the day?

Is it too much to say, that maybe, it also has our worship?

But a bird, not so little, has challenged me to ponder it tonight.

Because it is in those moments,
When we stop and take life in,
That our hearts cry “Alleluia!”
To the One from Whom life begins.

This? This is a broken piece of concrete that I found back behind over grown bushes and ground cover today. I’ll get to that in a minute. Let’s start with this:

So mama spent the day playing and fishing and watching our little ones while I got to some serious yard work.

I really, really enjoy working in the yard and garden. God is felt and heard so strongly when you work a garden. And it only makes sense that he is.

In the Bible it all started with a man and a woman in a garden. They were told to multiply, to tend the ground, to have dominion over the animals… And we know that wasn’t intended to be an oppressive dominion but a loving care for the animals. Man was even given the responsibility to name the animals. Man and woman walked and talked with God in the garden.

I thought about these things as I clipped away vines and cleared out areas overtaken by nature. Little by little I was uncovering and shaking the dead leaves out of bushes that had been overtaken by those vines. Slowly I was getting to see the plant for the beautiful thing it was. And it dawned on me.

Because there is something about caring for something else that ties our heart to our caring Creator. (Ever name an animal?… It makes you care. I hesitate to name fish anymore…)

Anyhow, the point is this: God cares. He pulls away those sins that try to overtake you. He reveals you for the beautiful creation he sees. When we care, we reflect our Creator who cares. And who is that Creator? What is his name? Where is he found?

As I turned over that piece of concrete, my heart was so incredibly reassured. That this God of mine, he is found in the brokenness. He was found on a cross, a cross that I deserved. His word was and is and will always be solid as a rock. And his name? His name is Jesus.

I am so thankful for today. For my mama playing and caring for our kids. For my husband who continues to faithfully work and provide and serve. (He was gone today working. I miss him when he has to work but for his work and his faithfulness in caring for me and our kids, I am thankful.) And above all I am thankful today for Jesus and the way he gently shows that he is still walking and talking with us.

All around you are things that need care.

You will find as you do, God opens your eyes to how much he cares for you.

The Bushes that Remain Burning

“A burning bush is not that uncommon… But a bush that stays burning… Now that is uncommon.”

A guest minister elaborated today on the sight of a burning bush as described in the Bible. Familiar with the region where Moses saw the famous burning bush described in Exodus, the minister shared this little bit of insight. He shared how a burning bush would not necessarily catch ones attention in that region, but a bush that remained burning would. I heard it, but didn’t think much more about it until tonight.

I lit a fire in our backyard to burn some branches and shrubs from our yard. They wouldn’t catch at first and so I added pine straw. Pine straw catches quick. It burns so hot, so fast but it will quickly burn out. And so there I was walking, back and forth from our big pine tree, grabbing handfuls of pine straw to keep the fire going and his words came back to me:

“A burning bush is not that uncommon… But a bush that stays burning… Now that is uncommon.”

It reminds me of a blog I follow by Ann Voskamp. When I first started reading her blog I noticed how on her home page was the logo of a burning bush with words something like “where every bush is ablaze.”

I got it then for the first time. That you and I, we are the bushes. We are here and gone.

But like the burning bush in the story of Moses, God can light us up. His presence can be felt all about us. His voice can be heard coming from us. Yes, I believe that is possible.

And often their fire is not some huge, dramatic, stand-back, bonfire type of fire. But instead a constant beautiful burn. Their burn is slow and steady. Their burn is lasting. Their burn catches many, many new branches ablaze over time.

Little by little. Step by step. They fill their hands and heart to empty them over and over gain. Their feet keep stepping. Their hands keep reaching. Their heart is determined to keep the fire ablaze.

Those are the burning bushes that remain burning.

Exodus 3:3
And Moses said, “I will turn aside to see this great sight, why the bush is not burned.” 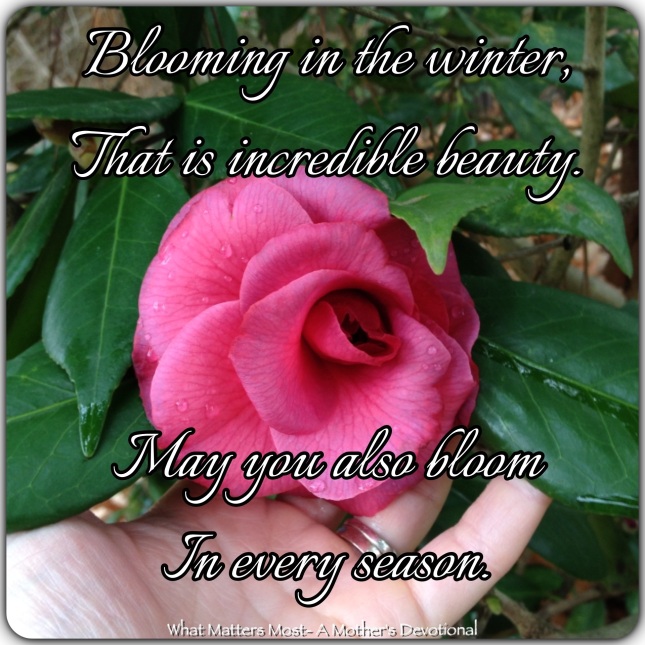 ← Older posts
What Matters Most
Create a free website or blog at WordPress.com.